SAT.1 has tested the SkyHeia

Last night we had a visit from Lara Schürmann and Fabian Scholz from SAT.1 NRW. The editor and the cameraman had travelled to get a feel for themselves of what it's like to sleep in a bed under the open sky.

Television comes for a trial sleep

The first time with our project on TV, that naturally caused some excitement for us. We want to inspire people to sleep outside and with a feature on SAT.1's NRW regional programme we would certainly have the chance to reach many people.

The weather forecast promised a starry night - these were already good conditions for an overnight stay under the open sky. If you can also enjoy the view of the starry sky while sleeping outside, the experience of nature is of course particularly intense.

We first had the question of which location to choose for the night. We briefly thought about looking for a spectacular location, but in the end we decided to set up the outdoor beds in Wolfgang's garden. It wasn't in full bloom yet, given the time of year, but we would have everything we needed at hand and could make ourselves comfortable together by the fireplace before going to sleep.

The main thing is cosyness

Of course, we took care of the comfort. So that it would not be too cold for Lara and Fabian in the cold night with temperatures close to freezing point, we provided the mattresses with sheep's wool covers. In addition, we put a fleece blanket on top of the mattress so that they would feel warm as soon as they got into bed. Two duvets, one filled with real goose down, were to provide cosy warmth on top. And finally, Wolfgang had borrowed his daughters' penguin and panda bear hot water bottles and put them out for our two guests. Translated with www.DeepL.com/Translator (free version)

Two aluminium boxes served as bedside tables, in which our guests could stow their utensils overnight. In addition, both were given a "Sun glass"a kind of jar with solar-powered LED lights embedded in its lid, providing a pleasant downward illumination that kept our light pollution to a minimum that night - in keeping with the spirit of our sponsorship of the night. We also had hats on offer in case someone got too cold around the head.

Lara and Fabian arrived late in the afternoon and their equipment told us that they had a lot planned: Two cameras, an action camera and even a night vision camera were in their luggage. It did indeed turn out to be an exciting and varied evening: after an introductory interview, we showed Lara how quickly the SkyHeia can be set up. Afterwards, a whole range of scenes and settings were shot: a time-lapse of the sunset, an effective pyjama metamorphosis, the starry sky and much more. Translated with www.DeepL.com/Translator (free version)

Sometime around midnight I got so tired that I made myself comfortable in one of the SkyHeias that had been set up. I fell asleep quite quickly and didn't notice anything of the still running recordings in the garden. When I woke up around half past six to the chirping of the birds, everyone was still fast asleep. Later, at breakfast, Lara and Fabian told me that they had overslept a bit and actually wanted to get up half an hour earlier. From experience, this was an unmistakable sign that test sleepers had not found the night at SkyHeia so bad. Translated with www.DeepL.com/Translator (free version)

But of course I had to check that. When asked, my assessment was confirmed: both subjects had enjoyed the night. "I found it sooo pleasant when I woke up this morning and the fresh wind was blowing through my hair and around my face. That was great!" She would miss exactly that when camping, because there waking up in the tent in the morning is not so refreshing, the air is usually stale and often too warm. She didn't mind the cold at night, only when she got into bed she was briefly cold, but she quickly warmed up.

Of course, we are happy when others enjoy sleeping outside as much as we do and when we can inspire them to sleep comfortably under the open sky. However, one thing in particular convinces us that our "mission" to make the night a nature experience is right and important: So far, all "newcomers" have perceived sleeping outside as a very positive experience.

We really have to give a big shout-out to Lara and Fabian for the resulting article. In less than two minutes, they managed to get people excited about sleeping outside. We haven't managed that in such a short time yet. Chapeau!

You can read the article on the website from SAT.1 NRW . 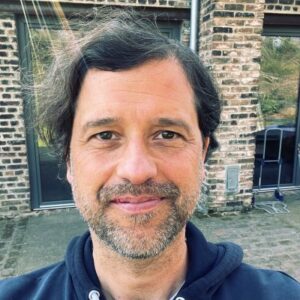 PrevPrevious articleHow many stars are there? And who makes them shine?
Next articleSleeping under the stars - a world first turns the night into a nature experienceNext